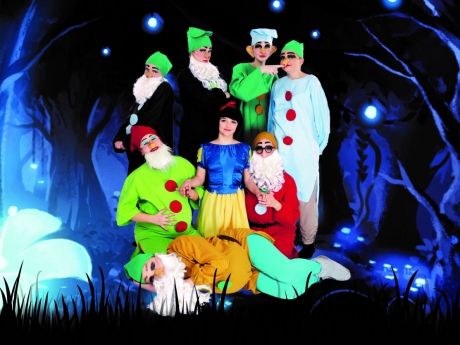 Classical balet fairytale based on the motifs of the book by Grimm Brothers and inspirated by Walt Disney film. Danced by kids for kids and adults.

Within pre-program we will introduce you student project Snow White and the Seven Drafts presented by arrangement with Karolína Zrníková and Barbora Sváčková, who are students and graduates on Elementary art school B-Art in Valašské Meziříčí and Zašová.

Once upon a time, long, long time ago a king and qeen ruled over distant land. The queen was kind and lovely and all the peope of the realm adored her. The only sadness in the queen´s life was that she wished for a child but did not have one.

One winter day, the queen was doing needle work while gazing out her ebony window at the new fallen snow. A bird flew by the window startling the queen and she pricked her finger. A single drop of blood fell on the snow outside her window. As she looked at the blood on the snow she said to herself:Oh, how I wish that I had a daughter that had skin as white as snow, lips as red as blood and hair as black as ebony."

This performace you can see within pre-program 13th year of international contenporary dance festival TanecValmez on Thursday October 15th at 18:00 in KD Zašová