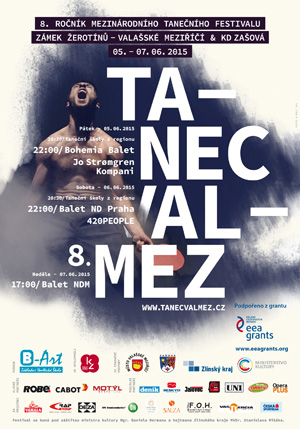 pre-program: performances of dance schools from the region

Bohemia Ballet – ballet ensemble of the Prague Dance Conservatory – INSPIRATIONInspiration is a new choreography composed by Ondřej Vinklát and Štěpán Pechar, which premiered in Prague in February this year. The pair of choreographers was inspired by the speech of Charles Chaplin in the anti-war film The Great Dictator from 1940. The performance is full of energetic and dynamic movement which is emphasized by the use of a plastic wall through which the dancers push their way onto the podium.

The choreographies of this company are distinctive not only by being technically mature, but also by bringing joy and enthusiasm of young dance artists to the scene. Bohemia Ballet is an ensemble consisting of the Prague Dance Conservatory students and graduates, who work with both young and renowned national and international choreographers.

Jo Strømgren Kompani - A DANCE TRIBUTE TO THE ART OF FOOTBALL

Jo Strømgren comments the artificial conflict between the “common sports” and the “eloquent arts” as well as the pride and prejudice surrounding the concept of working-class football and upper-class ballet. The performance delves into the physical routine of the greatest game on earth and elevates the aesthetic aspects of its insanity. Revealing both aesthetic and emotional qualities as well as physical demands, the performance offers an amusing, but not superficial insight into similarities between football and ballet.

With close to 500 re-runs in 23 countries around the world, Jo Strømgren Kompani still continues to perform the show. Obtaining a number of prizes, and an inmense press coverage over the years, it still represents an academic dilemma – is it populistic entertainment or cutting edge contemporary dance?

pre-program: performances of dance schools from the region

Balet ND – Members of the National Theatre in Prague – WASH IT OUT!

Wash It Out! is the name of the second choreography, which will be presented at this year's festival TANECVALMEZ by Ondřej Vinklát - a solo dancer of the ballet company of the National Theatre in Prague. Three dancers will introduces themselves to the viewers in this performance which is more of a motion theatre than a dance choreography. Apart from choreographer Ondřej Vinklát, the performance will also feature Gustav Skála, who graduated from the Prague Dance Conservatory and who currently teaches at the opera department of the State Conservatory in Prague and the Frenchman Mathias Deneux who has been a member of the ballet ensemble of the National Theatre in Prague since 2012.The choreography about life will be accompanied by music of Louis Armstrong or the famous Czech band Monkey Business.

Festival TANECVALMEZ will feature a world premiere for the first time. 420PEOPLE dance company will perform A DANCE TRIBUTE TO PING PONG within the Czech-Norwegian cooperation under the lead of choreographer Jo Strømgren.

Ping Pong is not just a sport. It’s a philosophy. The intellectual recipe is a mix of Yin and Yang, Heaven and Hell, Stephen Hawking and Uri Geller, with a dash of Kahlil Gibran and Bruce Lee on top. It is an independent continuation of the peculiar symbiosis of sport and dance JSK developed in 1997 with A DANCE TRIBUTE TO THE ART OF FOOTBALL.

The Ballet company of the National Moravian-Silesian Theatre is an important part of the theatre since the foundation in 1919 and it belongs among the ensembles with the longest tradition in the Czech Republic. The head of the company Lenka Dřímalová ensures that the group is opened to the widest possible audience by the choice of repertoire and by bringing foreign dance instructors.

Festival TANECVALMEZ will feature the performance Barocco by a Polish choreographer Jacek Przybyłowicz, furthermore a choreography Trio g moll by Pavel Šmok for which the company obtained a nomination for the prestigious Thalia Awards 2013 and an Award for the Best Collective Performance. The third exhibition will be their latest performance Jockey Dance by the choreographer Karina Elver.