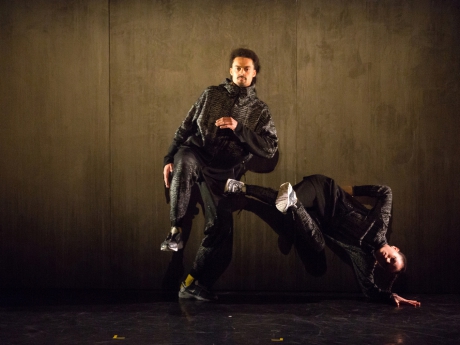 « DOS AU MUR » The creation of the show DOS AU MUR introduces an artwork with innovative concept, writing and technique, while also representing a novel approach toward the main element : the wall. Here, the artists aim to share a different approach of dance with the audience. The two dancers-choreographers on this project, Camille Regneault and Julien Saint Maximin, wanted to push the artistic reflection toward a sociological analysis of human experiences, especially regarding the way humans evolve in society. Beyond the artistic and philosophical aspects of this creation, the artists have the desire to highlight the codes of Hip Hop dance, built on the search for originality and the desire of technical performance. DOS AU MUR is a creation where Hip Hop dance mixes aesthetic and body performance in order to raise objective and intelligible sociological questions. Through the expression “DOS AU MUR”, the artists approach a process in which humans, and the society that they form, are in constant correlation. DOS AU MUR sends us back to the idea that humans are building their surrounding world, which in return will influence them.DOS AU MUR is inviting us to think about the role of human beings and their share of responsibility for the two main ideas suggested by this expression.

Dos au Mur (Back to the wall): This expression originates from fencing: when a fencer steps back too much to avoid danger, he ends up being “Back to the wall”, without another choice than having to move forward to go fight his opponent. Figuratively, this expression means that we do not have any option left, that we have to act and solve problems. Starting from that principle, the wall is there to stimulate the survival instinct of the dancers when facing situations that we are all confronted with, because of us or in spite of everything. On a second level, the wall, which is the central element of the creation, symbolizes the duality that humans create naturally as a unique source of reflection and landmark. Therefore, the wall is first and foremost the materialization of our behavior, stretched between psychological border and building of constant antagonisms.

Camille Regneault « Kami » Formerly a national level gymnast, then self-taught in Hip Hop dance, Kami created the “Compagnie EliôZ” in 2007 of which she is the choreographer. She then started the spinoff company Yeah Yellow in 2012 with Bee D. She has also been a dancer for Pierre Rigal’s “Compagnie Dernière Minute” since 2008, in the shows «Asphalte», «Standards», «Paradis Lapsus» and «Scandale» performed worldwide including Paris, Sidney, Sofia, London, Atlanta, Hong Kong, Bangkok, Hanoi, Surabaya, Jakarta… She has also been working with other choreographers, namely Hervé Sika, Mohamed Rouabhi, and Emilie Carayol. At the same time, she competes in breakdance battle competitions with Yeah Yellow in France (three times French Champion: 2013, 2015, 2016) and in several world competitions (Champion of the World Championship Breakdance Unbreakable in 2018, Silver Medal in the 2016 World Championships, Silver Medal in the International Hip Obsession in France, 9th rank at the International Silverback open B-Boy USA).

Julien Saint Maximin « Bee D » Self-taught in Hip Hop dance, Bee D distinguishes himself with his unique repertoire of movements and original style. He became famous touring the battle scene, while also being a choreographer, dancer and founder of the Phase T crew. He has won several titles including French Champion, European Champion, and 4th place in the Break Dance World Championships (BOTY 2005). In 2012, he created Yeah Yellow with Kami and competed with this group in numerous international battles. He won with Kami and the french team the World Championships Outbreak in Slovakia in 2016. Alongside the competition, Bee D has been involved in several other companies including Black Blanc Beur, Des Equilibres, Cie A/ R, Collectif A.O.C. He has worked with several choreographers : Régis Obadia, Lionel Hoche, Misok Séo, Georges Momboye; and he has performed in the circus show « Africa Africa » by André Heller. Presently, he is working for Pierre Rigal’s « Compagnie Dernière Minute » in the shows «Asphalte», «Standards», «Paradis Lapsus» and «Scandale».